Evening Shadows opens in a small village in India where the prodigal son returns home after four years only to find him ambushed for arrange marriage. Later, we learn that the only reason Kartik return home is to meet his loving mother, who sadly still lives under the patriarchy norm. But, of course, the film’s plot lies in the drama when the son comes out to the mother. This is an important scene, which I think is rarely seen in many LGBTQ films, and especially in Indian cinema where little to none LGBTQ character representations ever made it mainstream. And if there are any, it’s a byproduct of recent awareness, but still constraint to make sure it’s not too bold.

However, Evening Shadows cuts all conservative cliché and presents us with the real problem. What will happen when a gay Indian son comes out to his mother? It’s dramatic for sure, but not far from mirroring real life. In the film, when Kartik took his mother for a picnic so she can have a day free from house chores, the thoughtful gesture turns into a nightmare after she asked him why he doesn’t want to get married. It’s easy to shrugged this scene and sweep it under the carpet and makes Kartik lies. But, he doesn’t and here’s what I find refreshing. When you choose to lie to your parents because of your sexual orientation, it’s the hardest and the heaviest burden anyone could carry. And still, most of the times, the one with this dilemma chose to stay silent afraid of the consequences. 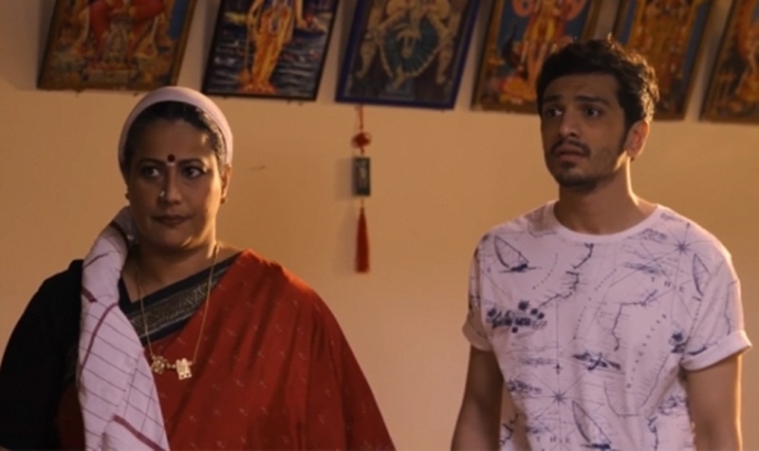 Years ago, I remembered watching gay YouTubers who stressed out the importance of coming out. I know how important the passage is, but I never consciously understands why and after years of experience and education, I finally understood. When someone comes out to the person they love, it will not only be a huge relief for he/she, but it also give chance to the other person to realized that there are real person they know with a different sexual orientation. By coming out, it could actually “normalize” the taboo and a chance to relate from a place of compassion. But, of course, it’s highly important to take safety reasons before coming out.

Saying this, Evening Shadows is a heartwarming film that could actually help “ease” the process, as stated by the film director Sridhar Rangayan during 100% Manusia Film Festival. He aimed to make a film that could lead the coming out conversations going, especially between a mother and a son.

In the film after series of dramatic scenes, the mother finally accepts his son for who he really is. There are several lines that I swear could be taken out of real life. For instance, when the mother thinks that the big city has “corrupted” his son (sexual orientation from influence), or how she relates being “gay” to “promiscuous” – who haven’t heard those concerns before? I know I have.

The latter itself is still a stigma in the society who thinks that gay men are only “in it” for the physical gratifications, but of course, it’s merely that. Like any sexual orientation, physical lust is a founding factor, but more than that it’s always about love and companionship. Or as aptly quoted from Moulin Rouge, “The greatest thing you’ll ever learn is to love and be loved in return”. Kartik is played by newcomer Devansh Doshi, who Sridhar informed us was chosen for his acting chops, and I must say he did a good job. While, Mona Ambegaonkar gave a memorable performance as the docile yet fiercely loving mother, Vasudha. There are several scenes in the film between Kartik and Vasudha that hits close to home. So, if you’re a mommy’s boy (and I said it in the most sincere way), you better bring Kleenex!

While the film focuses on the coming out and mother-son relationship, several subplots will surely raised eyebrows. Like when Kartik had early sexual encounter with his uncle, whom is now married with kids but still lust over men, tackling in-the-closet problems among many Asian men who preferred to be undisclosed, feared and kept as a secret.

Another subplot deals with Indian patriarchy problem between married couples, where the wife is treated more as a helper than a wife. And the issue here is treated objectively, reasoning that sometimes the husband isn’t always the bad guy as they are also a byproduct of the society who taught them to exert power over compassion and harsh words over healthy discussion.

I must admit that it felt good to watch well-rounded gay characters in Indian cinema. I realized how important inclusivity is in a motion picture, as when I see someone who looks like me, shared similar stories like me, and could have a happy ending on screen, it gives me hope for a better future.

The director commented in the beginning that Evening Shadow is “a Bollywood film with drama, tears and laughter”, and now I must add, “with a big heart and purpose as well”.

Also, if you had a good time reading this review, please help me and share it with your friends. Find the share buttons below 🙂