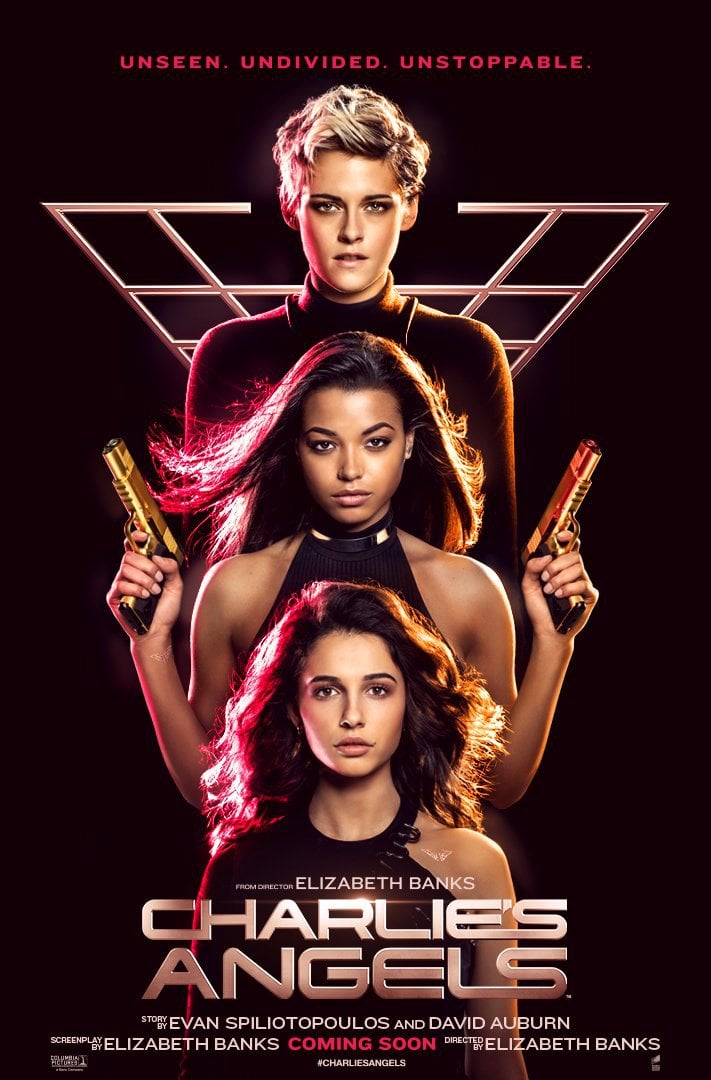 I remember back in 2000 when the first reboot of Charlie’s Angles was released. The film, needless to say, was a phenomenon. The film was packed with fun, crazy stunts and gorgeous cast that made it different than the other action films. It also went on to make $264.1 million, which is good for business. When the second installment, Full Throttle, bombed at the box office, with it goes our hope for another sequel with Cameron Diaz, Drew Barrymore and Lucy Liu.

Until 2016, when the new continuation film was announced and released recently in November 2019. With 3 years in writing the script, directing and others in between, the fans were curious to see how it fare. But, if you’re reading this then you must have seen the film and read the report stating that sadly Charlie’s Angels (2019) is deemed a flop in the box office.

I watched the film last week and although I did find it enjoyable to an extent, it lacked the kicks and punches that make a good film. Now, I am no movie expert, but I have had my fair share to know what went wrong with a film and perhaps what could have been different. So, here are my suggestions. Spoilers alert!

Charlie’s Angels’ success formula depends on it being sexy and campy as seen in the 70s TV show and the blockbuster films. Even the short-ride 2011 show followed the same path, but with the new film it feels neither Elizabeth Banks and Evan Spiliotopoulos (writers) realized that in 2019 the audience wants something different. Simply, the 2019 Charlie’s Angels feels boring because it lacks originality in its script. Take James Bond series for example. The franchise also had similar theme: suave and flamboyant as can be seen in the dozen of films released, until it got drastically changed with the release of Casino Royale in 2006, where the film explored darker themes and became a more serious film. And voila! the franchise got its box-office makeover and it still strives till date.

And how I wish Charlie’s Angels would follow behind and shows us a complex issue and darker tone in its story. The film played it too safe by presenting similar, boring plot where the Angels have to stop dangerous technology from getting out into the world. The whistle-blower played by Naomi Scott, in my opinion, is the weakest character in the film. They could have given her something more substantial and heavier struggle to make it more interesting.

The script relies on the angels’ banter and relationship, trying to show us how a new batch of Angels is formed. It’s not a bad idea, but the execution was done poorly. It also goes without saying that none of the Angels have strong personalities, maybe except Jane Kano who previously was a Mi6 agent. Her backstory, albeit short, was more interesting than the technology threat. The film could have focused more time on each Angels backstory. How can you have a film without strong, developed characters?

Of course, Kristen Stewart is a big star, but is she as big and popular as Cameron Diaz back in the 2000s film? I don’t think so. Perhaps, after Twilight fame she would have been, but now Stewart is just not. Why am I talking about this? Well, argue all you want, but if you’re going to make a continuation of a big-franchise film then you should have bankable actors to draw them in. The 2000’s CA had Diaz and Barrymore, who were HUGE stars in the 90s, and Lucy Liu had several works before landing the role as Alex. Meanwhile, only Kristen Stewart had the star power. They might think after Aladdin‘s success, Naomi Scott would have drawn more audience, but let’s be honest, she isn’t there yet. Ironically, the two actresses were overshadowed by the newcomer Ella Balinska who stole the spotlight as Jane. It wasn’t a bad ensemble cast, but it wasn’t a well-prepared one.

Every good action films had a good twist. From Mission Impossible to James Bond to Marvel Universe – they all shared a good twist in the end… Oh sorry, I meant unpredictable twist! The twist in 2019’s CA is so blah that I wondered why Patrick Stewart agreed to star in this. It’s a waste of talented actor in my opinion. With better script there will be better twist.

We are in the era where Tom Cruise did death-defying stunts on Burj Khalifa in his Mission Impossible series. There were crazy martial-art sequences in high-grossing Indonesian films like The Raid and, heck, even several Marvel films had unbelievable stunts. So, what happened to Charlie’s Angels, Banks? Really, it’s such a shame to see that an all-female action film lacked the integral part of having fantastic action scenes. There were some good ones, I won’t ignore, performed again by Elsa Balinska, but overall action was quite dull and unmemorable.

Film director Elizabeth Banks had even come out and tweeted that the film is a flop, so here I hope that next year’s remake/reboot/re-whatever films will learn from Charlie’s Angels lesson and eventually give us a good film and not just another mundane clog in the machine.

2 thoughts on “What Will Make Charlie’s Angels (2019) A Better Film? My Opinion On Why The Film Flopped”