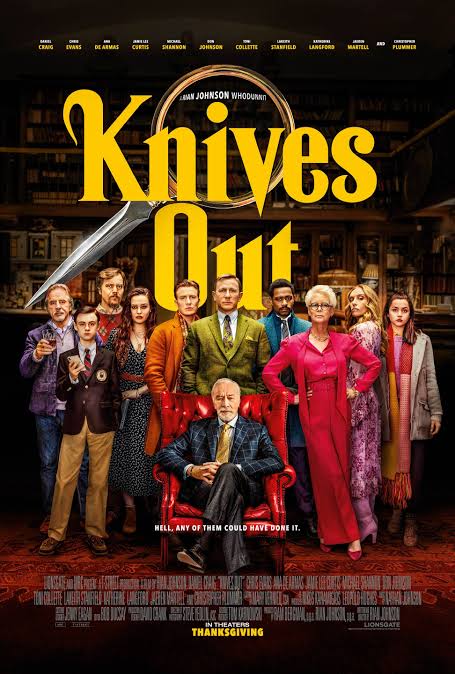 The whodunit film Knives Out has amassed rave reviews and praised from critics and moviegoers alike, but the way I see it, it’s a smart film but with a weak twist. Centering around a rich family with eccentric members, the film main is an immigrant caretaker, Marta Cabrera, who has to help detective Benoit Blanc to investigate the family’s patriarch novelist, Harlan Thrombey’s, suicide.

Inspired by Agatha Christie’s novels, director Rian Johnson paid a lot of homage to her great books and successfully built an engaging first-half, like scenes when they traced back moments before Harlan’s death, the squeaky stairs (makes you wonder why rich people have noisy stairs?), going to great lengths to cover your tracks, and, of course, creepy granny.

For a murder mystery film, Knives Out has a gorgeous setting (English country house FTW!), cinematography and sterling cast of some Hollywood’s best, like Jamie Lee Curtis, Toni Collette, Michael Shannon, Chris Evans, Daniel Craig, Christopher Plummer and the talented, Ana de Armas. While Ana and Daniel’s characters got our main attention, I am disappointed that they underused some actors. Toni Collette’s definitely could (and should!) do more than playing an opportunist widow, while Jamie Lee’s matriarch of the family felt “what does she do again?”.

I also find it odd that Chris Evans’ character, Ransom, took long to enter and when he did, it was hallelujah predictable. The second-half felt weird, as if Rian didn’t know where he is going with the suspense he had built and thought “Okay, perhaps we can make the suicide to be a real suicide and reveal it midway. Oh, and let’s add some car chase too, the audience’s going to go nuts!”. But, at least one viewer didn’t.

Despite my rant, I did enjoyed Knives Out and I think it has the potential to be… greater? But, it still lacked the surprise and twist one gets from reading Agatha Christie’s novels. Speaking of which, do you guys enjoyed Murder on the Orient Express film, I seemed not to remember much about that one.

PS: I get the immigrant sociopolitical notion in this, yes okay great, but the Thrombeys would be better if they were British.

Also, you can read more reviews here. What about Charlie’s Angels? Or the Indonesian superhero, Gundala?